I tend to shy away from data, believing that not everything can be measured, at least I did until now. I have discovered the maverick approach to data and it is delightful. 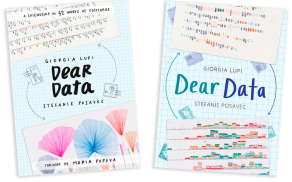 Let me introduce you to Dear Data, a book by information designers Georgia Lupi and Stefanie Posavec. This book of data sets will make you laugh, wince, want to read it voraciously and just maybe, reach for some coloured pencils and some paper so that you can design some data of your own.

I find the book inspiring and I recommend it.

The book started life as a casual conversation, becoming almost immediately a collaboration, with the authors designing data as a means of communication. Georgia, who lives in New York, and Stefanie, who lives in London, only met twice before they started this project.

Since childhood, both Georgia and Stefanie have been fascinated with collecting and organizing information and this has continued in their professional careers. Unusually, in this era of technology and Big Data, theirs is an analogue approach.

Their joint project was planned to last one year. Over the course of that year they would describe what happened during the week. They would collect ‘small data’ based on their own experience, of things that could not be captured by computer. They would design and illustrate the data on a physical postcard using pen and ink, add a stamp and mail it to the other.

These postcards are an attractive record of what happened. The content is personal and approachable, and each week’s design is unique. The design captures emotion, as well as evokes emotion.

As the project evolved, the authors learned a lot about themselves, as well as each other. A postcard would generate questions, starting a conversation. What is different about these conversations is that the data led them to subjects that two friends living nearby would probably never talk about.

Its appeal to the knowledge professional

For me these postcards embody the data information knowledge pyramid. The authors collected raw data. They used their design skills to group it to make sense of it, and to draw, what is in effect, a story on both sides of the postcard, with old-fashioned low-tech tools. By this means, you the reader, get to know these people too.

As you might imagine, over 52 weeks Georgia and Stefanie’s visual vocabulary expanded and personal styles evolved as their confidence grew in gathering and handling the data. What started out as a quirky and personal project between two people with a similar interest, subsequently became the basis of the book, Dear Data.

Here is some of what they learned:

They have convinced me!

This video is a short introduction by one of the authors (3 minutes).

If you are interested in learning more, I recommend this video, Dear Data long version (23 minutes).