Sprezzatura is the art of making something look effortless but which in fact is not. 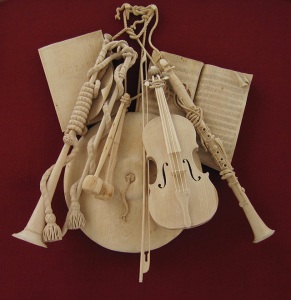 David Esterly is an upstate New York wood carver who was commissioned to replace a Grinling Gibbons’ (1648-1721) carving following a fire at Hampton Court Palace in 1986. In his beautifully written book ‘The Lost Carving‘ (2012), Esterly talks of sprezzatura, which is the first time I had heard this term. When I received a compliment for organizing a successful programme of 29 events over the course of one week, I responded by saying that it had been teamwork and all I had done was spread fairy dust. How disingenuous. It was sprezzatura in action!

David Esterly has given a TEDx talk on Type 2 Creativity, a mundane title he uses instead of sprezzatura.  Where Type 1 creativity is all about the spontaneous flash of genius and inspiration, Type 2 creativity is the process of making, of bringing ideas to fruition, recognizing the potentialities that you are confronted with as you go along which you nurse to completion.  It’s about collaborating with the world and letting ideas take root.

In this online world that demands an instant response, there is a place for Type 2 creativity and sprezzatura – and for wood carvers like David Esterly.